You are here: start » faq

Translations of this page:

The TeX parser reads the structure and input of the text very accurately. It is also very precise about reporting errors. This page describes some of the most common errors that occur and offers advice on how to solve them.

Special characters present a further source of errors. So-called reserved characters such as _ \ $ & # { } % cannot simply be typed into the text as they carry a special meaning in TeX. An underscore character, for example, must be directly preceded in the text by a backslash (MacOS X shortcut alt + shift + 7). Thus you would type \_ rather than _. The special EOA command \EOAtilde must be used to write the tilde character (~).

Here, an unknown command has been detected. This is often due to typing errors, such as \EOAsction{title} in place of \EOAsection{title}.

This error is due to the omission of a closing bracket:

This leads the parser to interpret the whole of the following text as part of this section title.

This is the opposite of the above error. Here, there are too many closing brackets. It is possible that \EOAsection{title}} has been entered.

The \item command can only be used within the EOAitems or EOAlist environment. If entered in the text without these commands, it will lead to an error.

The file was not found. This could be due to an incorrectly labeled image, folder or a faulty path. For example, Image/Picture1.png when the folder containing images is actually called Images. (The use of blanks and special characters in file names is not accepted in TeX.)

Almost all editors like TeXShop give the parser output in a window. The image below shows the protocol of a parsing run in which a grave error has been detected. 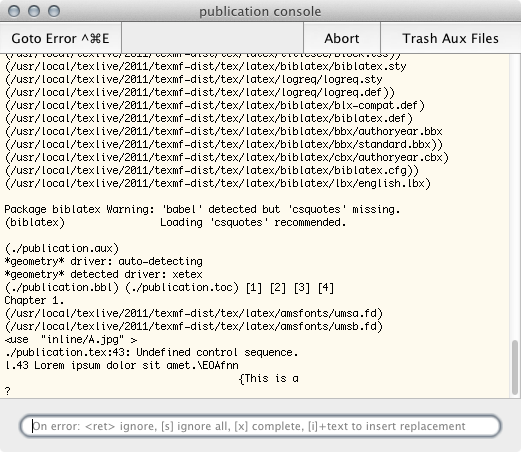 The lead text gives information about loading the required TeX packages; the numbers in square brackets show which pages are currently being parsed. The parsing run in the window below shows that the first four pages have been parsed without difficulty.

Information such as Chapter 1 or <use “inline/A.jpg” > indicate that a chapter has started or that an illustration has been incorporated.

The parsing run shown in the window was interrupted. The error message is:
./publication.tex:43: Undefined control sequence
l.43 Lorem ipsum dolor sit amet \EOAfnn
{This is a
?

TeX refers to the actual error as Undefined control sequence. The reason for this is a simple typing error: the footnote command was given as \EOAfnn rather than \EOAfn. The superfluous n led to the error. To find such typing errors quickly, the TeX parser refers to the line where the error can be found, l.43 (l = line). The error can be removed by changing \EOAfnn to \EOAfn in line 43 in the file publication.tex. 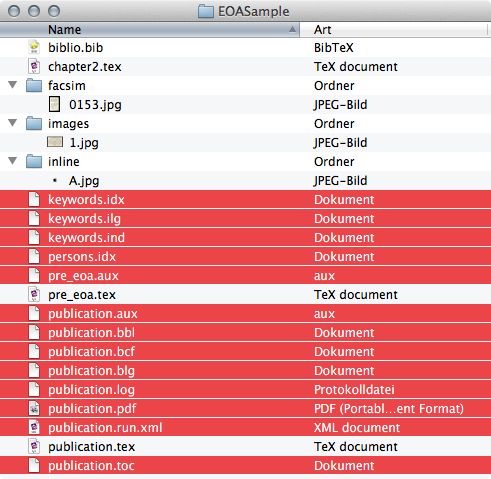 Should errors appear repeatedly that cannot be detected by the methods described above, it is possible that a cache file used by XeLaTeX is corrupt. All files ending with the suffixes .aux, .bbl, .bcf, .idx, .log, .pdf, .run.xml, .synctex.gz and .toc should be deleted from your publication folder. Care should be taken not to accidentally delete any of the main .tex or .bib files.

When using OS X, the following error warning may occasionally be given when creating a bibliography with Biber:

If this happens, save all documents and restart your computer. Technically savvy users can also simply delete the directory at the terminal with the command rm -rv $(biber –cache) (administrator rights required).

Except where otherwise noted, content on this wiki is licensed under the following license: CC Attribution 4.0 International